Recently, a great interest among manufacturers of fish products is caused by the method of salting fish raw materials – injection.
The main principle of the injector is the uniform introduction into the muscle tissue of fish through the needles of brine or a combination of brine and various preparations for salting or for giving certain properties to the semi-finished product. 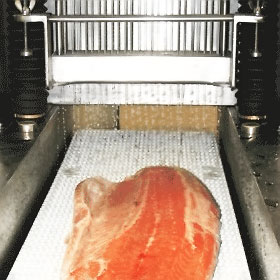 Injection of fish fillets in the production of salted products.

For injection of fish fillets, multi-needle injectors with thin “bevelled” needles are used, providing delicate introduction of brine with minimal mechanical damage to the fillets and a small working pressure of the liquid. The brine introduced into the fish thickness diffuses in the meat of the fish much faster than from the surface, with a dry, mixed or wet salt. This achieves a significant acceleration of fish salting. It was found that in 2-3 hours after salting in the fish, the amount of salt injected was uniformly distributed. This allows, in addition to accelerating the salting out, to keep moisture in the fish, which positively affects the output of the finished product.

Injecting a split fish with skin and bones for cold smoking.

Since cold smoking is a method of conservation based on the extraction of excess moisture from the fish during smoking, and the injection method based on the introduction of moisture, the operating mode of the injector to prepare the salted semi-finished product differs from fillet salting. When grilling the carcass, you need to use thicker needles than for salting fillets, with high mechanical strength and a sharp end for quick puncture to avoid deformation of the carcass at the time the needle touches the fish skin and a small volume of large brine introduced. The restrictor bar of the injector should effectively remove the fish from the needles, since when the needle hits the bone, it stays in the fish, rises above the transporter of the injector and does not move along it. This reduces the quality of the semi-finished product and entails structural defects and uneven salting out. With this method of salting and properly adjusted equipment, the yield of products increases insignificantly, but significantly reduces the time of salting of fish. For example, in the production of cold smoked halibut, the time for complete salting and uniform distribution of salt in fish does not exceed 24 hours after injection. This method of salting halibut will exclude the tightening (smell of the spinal bone) associated with the slow penetration of salt into the body through the skin and the diffusion of salt through the fat-rich muscular tissue of halibut. Prepared in this way, semi-finished product, almost does not require a long wet before smoking, but the necessary condition is cuts on the carcass, allowing excess moisture to escape from the fish strata in the process.

Injecting a carcass or fish with a head for hot smoking.

One of the indicators of the quality of hot smoked fish is the juiciness of the meat, associated with the amount of moisture in the finished product. This has a positive effect on the organoleptic and technological properties – the ease of subsequent cutting and slicing. Injectors for the production of semi-finished products for hot smoking essentially differ from the machines mentioned above. The most important difference is the configuration of the needle – the conical tip of the tip and the apertures for the outlet of the brine are located in the lower part of the side wall of the tube. The pressure of brine in this way is much higher than that described in the previous methods and directed perpendicularly to the direction of movement of the needle into the thickness of the muscle tissue. This provides an excessive introduction of moisture into the fish, which contributes to a significant increase in the yield of finished products of hot smoking.
So, what does the use of the injector mean? Firstly, this is an increase in the yield of finished products, in comparison with the traditional methods of salting by 3-30%, depending on the method of preparation of the semi-finished product. Secondly, this is a shortening of the ambassador time several times (or an increase in the production capacity of the ampoule site several times). Thirdly, it is possible to rationally use modern preparations and preservatives for an introduction to fish in order to give it some properties that can not be achieved by treating the surface. Fourth, it helps to achieve a stable salt content in the finished product. But all the same, the most important advantage of this method of salting is that the salt is delivered evenly to the hardest parts for salt and immediately has a preservative effect on fish meat, excluding defects in the semi-finished product. Especially this property is useful for the salting of such “capricious” fish as halibut, butterfish, sturgeon, eel, etc.
The company RZPO is the leading developer of machines for fish salting. For 5 years specialists of the company – engineers and engineers developed the concept and worked out the methods of injection and salting, on the basis of which the machines for salting under the trademark “RZPO” were launched. They are produced at the assembly plant of the partner company in Poland in several modifications to solve these complex problems, which our article is devoted to. The equipment is made of stainless steel using high-quality imported components. Injectors “RZPO” are by far the most functionally equipped and superior in its performance to any analogs, at much lower prices.
For any task, our experts will be given appropriate recommendations on the technology and on the basis of this, you will receive equipment that fully meets the goal.